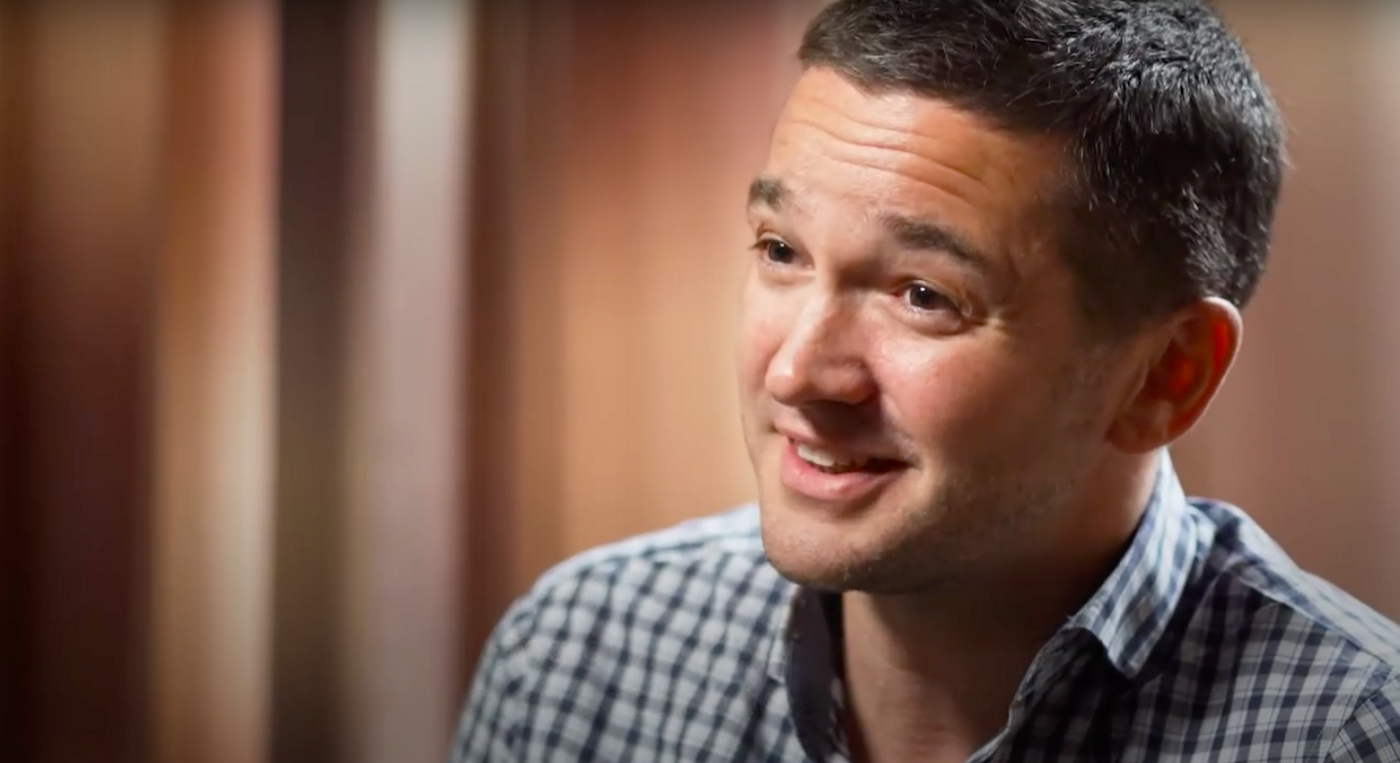 The Court of Justice of the European Union has just made a landmark decision, saying that a lawyer who declared that he would never hire a “homosexual” person in his law firm was discriminating under an EU employment directive. Meet activist Emiliano Ganzarolli, from the powerhouse group of LGBT lawyers who took the case.

Emiliano Ganzarolli is a member of Rete Lenford Avvocatura Per I Diritti LGBT (Lawyers For LGBT Rights) an association of about 150 lawyers founded in 2007 to take representative action on the behalf of LGBT people before national and international jurisdictions, and to ensure enforcement of LGBT rights in Italy.

The association has notably been active in the fight for marriage equality, and the implementation of a civil partnership framework for same-sex couples.

“In 2007 there was nothing in the Italian law concerning either civil unions or marriage and the association itself was actually founded because of this lack in our system,” says Emiliano in an interview filmed for the Voices of ILGA-Europe project last October. “It brought together lawyers and activists from the civil society to bring cases up to the constitutional level. In 2010 the constitutional court was asked to deliver a judgement on the possibility or not to have equal marriage in Italy. The case was not successful, we still don’t have equal marriage in Italy, but that was the beginning of many battles the association took.”

Recently, the Association was involved with the first case in Italy involving discrimination in an employment context, after an attorney declared during a radio interview that he would never hire a homosexual person in his law firm.

“When we received the communication that the Supreme Court had referred the case to the CJEU, it was the immediate reasoning to involve an umbrella association, somebody able to actually properly talk at the same level with the European institutions. So it came naturally to involve ILGA-Europe in this. ILGA-Europe’s litigation department has been extremely supportive, especially putting us in contact with the other EU countries.”

Two distinct questions arose before the Italian Supreme Court: Firstly, does legislation prohibiting discrimination in access to employment also cover a general statement made on the radio to the effect that the interviewee would not recruit homosexuals to his law firm? Secondly, in the absence of an identifiable victim, is it possible for Rete Lenford to seek to enforce the prohibition of discrimination in employment and occupation, including through the award of damages?

In a judgement delivered on 23 April 2020, the CJEU decided on behalf of Rete Lenford. Importantly the Court noted that the lawyer’s statements may fall within the ambit of the European Union anti-discrimination directive, even if no recruitment procedure had been opened or planned at the time when the statements were made.

Because discriminatory statements can have a chilling effect on prospective employees, therefore difficult to have an identifiable victim, the Court noted that where national law provides relevant conditions, an association, as in this case Rete Lenford, may bring legal proceedings for a finding of discrimination and for a sanction to be imposed.

Welcoming the judgement, Senior Litigation Officer with ILGA-Europe Arpi Avetisyan said: “I’m extremely pleased that CJEU reaffirmed protection against homophobia in employment and made clear that discriminatory statements in employment and occupation under the EU law are strictly prohibited. The Court sent a strong message that EU law does not tolerate discrimination based on sexual orientation and safeguards “the principle of equal treatment in employment and occupation, and the attainment of a high level of employment and social protection”. Congratulations to Rete Lenford on the victory and for setting an important milestone in clarification of EU law.”

After Polish Case, CJEU Rules to Protect Self-employed Workers based on Sexual Orientation

In December 2017, a self-employed worker and his partner published a music video on YouTube aimed at promoting tolerance towards same-sex couples. Shortly after the […]
read more
Podcast

In our analysis of the data from the largest LGBTI survey carried in Europe, we’ve found that bi people, particularly those with intersecting identities, experience discrimination in large numbers.
read more
News

Today, the Advocate General of the CJEU has issued an opinion in the case of J.K. vs the Polish public broadcaster company TP, stating that discrimination based on sexual orientation in employment is not acceptable under EU law.
read more
Blog

Today, the case of J.K. vs the Polish public broadcasting company TP, in which the applicant is seeking compensation for the discontinuation of his freelance […]
read more
Case Law

When an EU country recognises a child and its same-sex parents as a family, all EU countries should recognise them as such, so to guarantee their freedom of movement. This is what the EU’s top court ruled in December. But how this case has advanced LGBTI rights in the European Union and what comes next for rainbow families?
read more
Case Law

It was a year of further lockdowns, of new strains of the COVID virus, and the uncertainty they have brought, and most of all, enormous […]
read more
Blog

As 2021 comes to an end, we have collected some of the moments, events and trends that have marked the year in the latest episode of The Frontline, ILGA-Europe’s podcast about LGBTI activism and lives in Europe and Central Asia. Read here some of the episode’s highlights and find out reasons to stay hopeful in 2022.
read more
Blog

Recent data shows that LGBTI young people perceive the labour market with fear and that most of LGBTI youth living with their families have experienced violence in different parts of Europe. These are among the alarming facts related to the impact of inequality and oppression in LGBTI communities, as identified through ILGA-Europe’s No One Left Behind initiative.
read more
Press Release

The European Court of Human rights has ruled that the refusing a mother custody of her youngest child on the grounds of her sexual orientation to be discriminatory and a violation of her right to private and family life.
read more
Blog

Every year, ILGA-Europe publishes our Rainbow Map, charting LGBTI rights in 49 European countries. But we’re not the only benchmarking map on the scene. From sexual orientation laws in the world to inclusive churches in Europe, these charts depict the state of LGBTI rights and more across the world.
read more
Report

In March 2021, a coalition of European networks working on LGBTI rights and including ILGA-Europe, EL*C, TGEU, OII Europe and EGLSF submitted to the Parliamentary […]
read more
Press Release

ON 5 JUNE 2018, THE COURT OF JUSTICE OF THE EUROPEAN UNION (CJEU) ISSUED A LANDMARK JUDGEMENT AGAINST ROMANIA, RECOGNISING THAT THE TERM SPOUSE INCLUDES SAME-SEX SPOUSES UNDER EU FREEDOM OF MOVEMENT LAWS. THREE YEARS LATER, CLAI HAMILTON, SPOUSE OF ROMANIAN CITIZEN ADRIAN COMAN, HAS NOT BEEN GRANTED RESIDENCY YET. NOW THEY’VE BROUGHT THE CASE TO THE EUROPEAN COURT OF HUMAN RIGHTS (ECHR). HERE, ADRIAN COMAN TALKS ABOUT THE ORIGINAL CASE, AND HIS HOPES WITH THIS LATEST DEVELOPMENT.
read more
Podcast

We meet Kalina and Jane, from Bulgaria and the UK respectively. Because their daughter Sara was born in Gibraltar, she cannot claim UK citizenship via […]
read more
News

Almost three years after the European Court ruled that Romania must recognise a same-sex couple under EU freedom of movement legislation, its government is yet to implement the judgement.
read more
Press Release

Today, Tuesday 10th November 2020 the Justice Committee of the Hungarian Parliament tabled a bill that would abolish the Equal Treatment Authority (ETA), Hungary's most important equality body set up in 2005.
read more
Subscribe to our newsletter
Subscribe
loading...