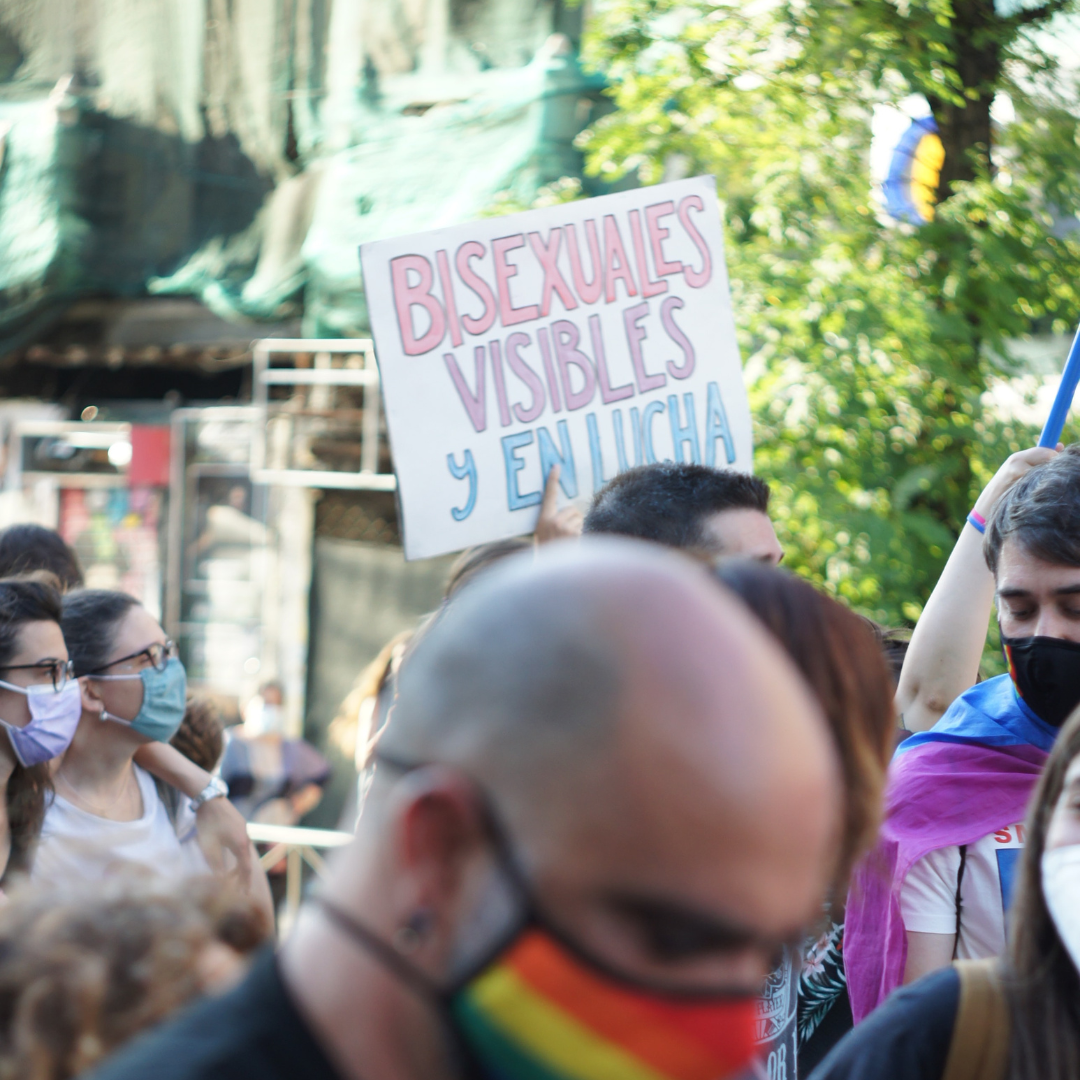 In our analysis of the data from the largest LGBTI survey carried in Europe, we’ve found that bi people, particularly those with intersecting identities, experience discrimination in large numbers.

It’s Bi Visibility Day, an opportunity to celebrate bi people, communities and history. However, while we celebrate, it can’t be ignored that bi people are still subject to unique discrimination rooted in damaging myths that have a damaging impact on individual lives, and particularly for those on the intersections. For bi people to enjoy full equality in our societies, we must acknowledge the discrimination they suffer, especially those who are also part of an ethnic minority, who are trans, or non-binary or who have a disability.

However, it’s when it comes to bi people with intersecting identities that the biggest disparities are found. ILGA-Europe has drilled down into the FRA survey to analyse the experiences of bi people on the intersections. Here are some of the findings from our analysis.

The survey shows that while 19.22% of bi respondents experienced discrimination at work, this figure is over double for trans bi people of an ethnic minority, including migrant background, at 42.98%. The same goes for 27.32% of bi people with disabilities, 34.43% of trans bi people, 31.12% of non-binary bi people, and 25.62% of intersex bi people.

The bi experience of discrimination at work:

Another stark example is health care or social services. While almost 15% of the overall bi respondent group experienced discrimination when accessing healthcare or social services, when it came to intersex bi people the figure was almost 50%. Meanwhile 43.56% of trans bi people of an ethnic minority and/or migrant background experienced similar discrimination, 34.86% of trans bi people, 29.77% of bi people with disabilities, 24.15% of non-binary bi people, and 17.79% of bi people of an ethnic minority.

And that’s not all. Over 40% of respondents have felt discriminated when doing the following activities:

These figures are a stark reminder not only that bi people are often at risk of discrimination, but that this risk increases for certain members of the bi community.

ILGA-Europe will be publishing a full report based on our analysis for bi people from the FRA report later this year.

Disaggregated data, which can look deeply into the lived experiences of marginalised people, is a key demand of LGBTI and other human rights groups. With […]
read more
News

Today, the Advocate General of the CJEU has issued an opinion in the case of J.K. vs the Polish public broadcaster company TP, stating that discrimination based on sexual orientation in employment is not acceptable under EU law.
read more
News

Today, the case of J.K. vs the Polish public broadcasting company TP, in which the applicant is seeking compensation for the discontinuation of his freelance […]
read more
Blog

Many older LGBTI’s remain invisible to other elderly people, while suffering ageism within their own LGBTI communities and legal and socio-economic barriers in their countries. To mark International Day of Older Persons on October 1, we look at the worrying obstacles LGBTI people may face as they age in Europe, even in countries where LGBTI rights are ensured.
read more
Blog

To mark Bi Visibility Day 2021, we hear from seven bi activists from across Europe and Central Asia about debunking myths, their hopes for the future, and their place within LGBTI communities.
read more
News

Every year, ILGA-Europe publishes our Rainbow Map, charting LGBTI rights in 49 European countries. But we’re not the only benchmarking map on the scene. From sexual orientation laws in the world to inclusive churches in Europe, these charts depict the state of LGBTI rights and more across the world.
read more
Report

In March 2021, a coalition of European networks working on LGBTI rights and including ILGA-Europe, EL*C, TGEU, OII Europe and EGLSF submitted to the Parliamentary […]
read more
Blog

In our latest Podcast, BBC LGBT Correspondent, Ben Hunte sat down with us to talk about the relationship between the media and LGBTI issues, why some stories get all the attention to the detriment of others, the rise of anti-trans voices in newspapers and broadcasting, and ways we might get the real diversity of LGBTI stories picked up. Read more, and listen below!
read more
Press Release

Every 27th of January, the world pays tribute to the memory of the victims of the Holocaust and reaffirms the unwavering commitment to counter antisemitism, antigypsyism, racism, and other forms of intolerance that may lead to group-targeted violence.
read more
News

ILGA-Europe, ENAR and 150 organisations across Europe co-signed this open letter to European Commission President Ursula von der Leyen to raise our serious concerns regarding the lack of reaction of EU leaders regarding police brutality against people of colour in Europe as well as institutional and structural racism.
read more
News

It is with great disappointment that ILGA-Europe and ERA received the news of the decision of the Constitutional Court of North Macedonia to repeal the Law on Prevention of and Protection against Discrimination on 14th May 2020.
read more
Blog

The Court of Justice of the European Union has just made a landmark decision, saying that a lawyer who declared that he would never hire a “homosexual” person in his law firm was discriminating under an EU employment directive. Meet activist Emiliano Ganzarolli, from the powerhouse group of LGBT lawyers who took the case.
read more
Blog

ILGA-Europe is inviting organisations and groups from Europe and Central Asia to apply for this new funding opportunity to support D/deaf and disabled LGBTI activism*. The last day to submit your application (deadline) is Monday 10 February 2020.
read more
News

Fourteen civil society organisations -including ILGA-Europe- have written to the European Union and European governments to respond to the threat to our democracies in Europe. […]
read more
Campaign

Health4LGBTI is an EU funded pilot project aiming at reducing health inequalities experienced by LGBTI people. It has been implemented between March 2016 and March […]
read more
Case Law

Discrimination on the ground of gender identity
read more
Campaign