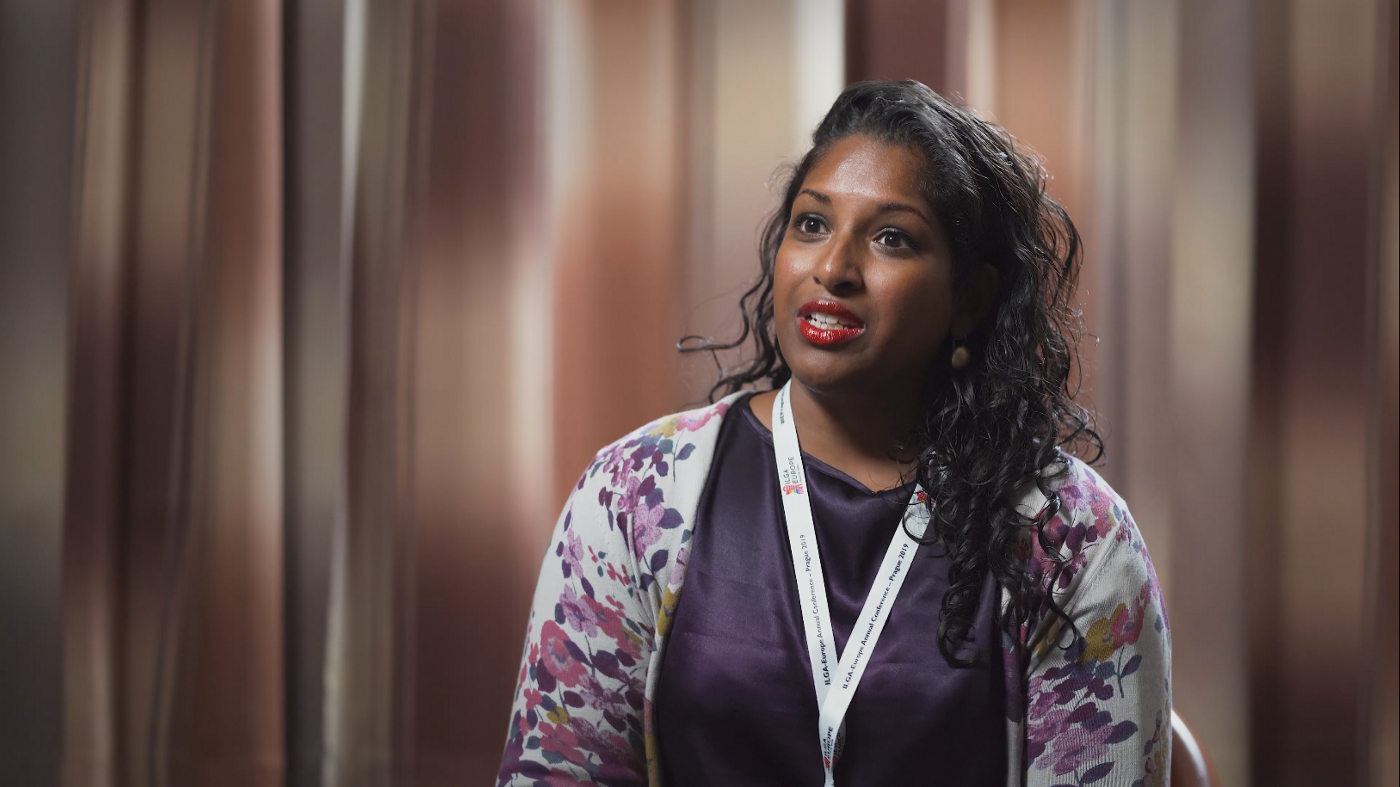 Adopted from Sri Lanka to a family in the Netherlands when she was just ten days old, Cherine Mathot survived childhood cancer which left her with a disability, and she came out as bisexual at the age of 15. In advance of International Women’s Day this coming Sunday (March 8), Cherine tells us how her experiences have informed her work for the LGBTI organisation COC Nederlands.

Activist Cherine Mathot currently works as Manager of Communications and Fundraising at the Dutch organisation, COC Nederlands, which advocates for LGBT rights nationally and internationally. “We are active in more than thirty-five countries,” she tells us for the Voices of ILGA-Europe project. “We try to bring people together, give them support where they need it, and empower them to make social changes.”

Cherine had her struggles growing up in The Netherlands. “I was adopted from Sri Lanka when I was only ten days old,” she says. “I grew up in an environment where I was the only coloured person, and at the age of ten years, I had bone cancer in my left leg, which left me disabled. When I was fifteen years old, I came out as bisexual to my adoptive parents and they didn’t respond that well.”

“All these experiences together made me feel different in all sorts of ways, and it was not always easy. I felt alone and ashamed in many periods in my life, but it’s also made me a bit stronger as a person and to be able to connect with a lot of diverse people. I think that’s my intrinsic motivation for being an activist, because I find it very important that people are seen for who they are and respected, that they have a chance to be themselves and to have a place in society.”

Cherine’s experience as a bisexual woman particularly informs her activism. “I think there are a lot of things to do for our visibility and acceptance,” she says. “I didn’t really feel part of the community when I was dating men, because I had a heterosexual lifestyle, but now I’m currently in a relationship with a woman, so I feel more part of the community. So that’s a really strange thing because I’m not changing, I’m still me, Cherine, and I’m bisexual, so I think that’s a challenge.”

Although Cherine’s adoptive parents were not accepting when she first told them about being bisexual, she didn’t let it rest there.

“I was very persistent in showing and telling them, ‘this is who I am’,” she says. “So I came home with my then-girlfriend and sat down on the couch holding hands, and talked to them about what it means to be bisexual. Slowly, gradually they changed their minds and now they are very accepting and very supportive. I find it an inspiration that people are able to change.”

We interviewed Cherine at the last ILGA-Europe conference in Prague in October 2019. It was her second year to be in attendance. “Last year, I encountered all the bi-plus activists and I was really inspired and also supported by the feeling that there are people like me with the same experiences,” she says. “I think all the discussions you [ILGA-Europe] have about LGBTI issues really help me in shaping my work for COC Nederlands, so I’m very happy with you!”

Disaggregated data, which can look deeply into the lived experiences of marginalised people, is a key demand of LGBTI and other human rights groups. With […]
read more
Report

Many older LGBTI’s remain invisible to other elderly people, while suffering ageism within their own LGBTI communities and legal and socio-economic barriers in their countries. To mark International Day of Older Persons on October 1, we look at the worrying obstacles LGBTI people may face as they age in Europe, even in countries where LGBTI rights are ensured.
read more
Blog

To mark Bi Visibility Day 2021, we hear from seven bi activists from across Europe and Central Asia about debunking myths, their hopes for the future, and their place within LGBTI communities.
read more
News

Every 27th of January, the world pays tribute to the memory of the victims of the Holocaust and reaffirms the unwavering commitment to counter antisemitism, antigypsyism, racism, and other forms of intolerance that may lead to group-targeted violence.
read more
News

ILGA-Europe, ENAR and 150 organisations across Europe co-signed this open letter to European Commission President Ursula von der Leyen to raise our serious concerns regarding the lack of reaction of EU leaders regarding police brutality against people of colour in Europe as well as institutional and structural racism.
read more
Blog

ILGA-Europe is inviting organisations and groups from Europe and Central Asia to apply for this new funding opportunity to support D/deaf and disabled LGBTI activism*. The last day to submit your application (deadline) is Monday 10 February 2020.
read more
News

call for contributions: lgbti and autism submission to council of europ

Apply now to participate in the Gathering for D/deaf and disabled LGBTI activists and LGBTI and disability rights activists in Europe and Central Asia. D/deaf […]
read more
Campaign