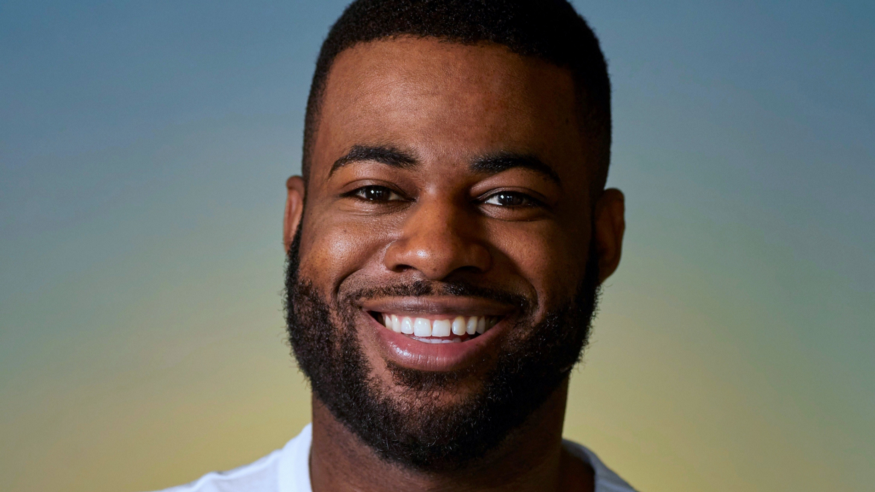 In our latest Podcast, BBC LGBT Correspondent, Ben Hunte sat down with us to talk about the relationship between the media and LGBTI issues, why some stories get all the attention to the detriment of others, the rise of anti-trans voices in newspapers and broadcasting, and ways we might get the real diversity of LGBTI stories picked up. Read more, and listen below!

Ben Hunte is having a problem with his rescue dog, Roxy. We’re sitting down to record an interview over Zoom, Ben talking from his London apartment, and there’s a slurping noise going on in the background.

“Oh, my God, my dog is licking herself!’ he laughs out loud. ‘Can we start again?’

He goes to put Roxy in another room, and when he comes back, still apologising, I ask how Roxy got her name. Ben explains that when the shelter sent through a photo, his partner Tom said, ‘She looks so foxy!’

“We both immediately went, ‘we have to call her Roxy!’ And it stuck. We’ve had her a year and a half now, and it’s literally the best thing that ever happened to me, to force me out for walks, force me into nature. She’s a real blessing.”

Ben is the first ever LGBT correspondent appointed by the BBC Newsroom, a job he’s been doing since 2019, reporting all LGBT-related stories on the six and ten o’clock news, across the broadcaster’s global website, and making one-off documentaries about among other things, the proliferation of so-called ‘LGBT-free Zones’ in Poland. His first year was a bit of a baptism of fire, with the COVID-19 pandemic particularly affecting LGBTI communities and providing fertile ground for a further rise of anti-LGBT authoritarianism in Europe.

“It’s been a rollercoaster,” he tells me. “I’ve been to some incredible highs, there’ve been quite a few lows. It’s very scary to speak to people about what they’re going through, and a lot of these issues aren’t really picked up and covered by international media. So, I do feel like it’s, it’s kind of on me to tell these stories. And as a result of that it does get quite taxing, but we are at a very weird time for LGBT rights internationally, so to be able to be in a role that does shine a light on some of that injustice, and some of the progress that’s being made as well, is just a fantastic opportunity and I’ve genuinely feel blessed every single day to be able to do it.”

Much of the LGBT-related media in Europe over the past two years has focused particularly on Poland and Hungary, and the backlash against LGBT rights in both countries, but they’re not an anomaly in the context of what’s happening across Europe for LGBT people and communities. I ask Ben why he think’s it’s so difficult to get the media to pick up on more nuanced stories about the issues that are facing LGBTI people?

Listen to The Frontline in different platforms here!

Over Ben’s two years as the UK’s most visible LGBT correspondent, there’s been a sharp rise in anti-trans voices and a lot of space given by the media to those voices. What does Ben think the effect is on trans people and communities?

“It’s really quite scary, to be honest,” he says. “Just before Christmas I did a story about the effect of the puberty blockers ruling in the UK and what that means to young people, and the amount of complaints that it got from people saying that we shouldn’t be platforming these trans young people to speak about their experiences. I became a journalist to expose what people are going through, and expose injustice and all of these different things. So, for me, as LGBT correspondent, I want to get to the heart of that: what are people thinking and feeling like, what are people going through as a result of this. I am seeing a lot of pain. I’m seeing a lot of hurt, I’m seeing a lot of fear, as a result of the toxicity that does exist in the UK media around trans lives. And that’s not to take any side on social media or anything like that, but just to say the actual fear and the distress that this is causing is real.”

Trans voices, of course, are not just in the UK; it’s a spreading phenomenon. But on the other side of the coin, for decades now the LGBT community has been seen as a very strong, unified, and successful force for social justice. Does Ben think the rise of anti-trans voices within the community itself sews division and maybe reduces our strength in numbers as a unified force?

“If there is one thing that I’ve genuinely noticed since taking on this role is how fractured the so-called one LGBT community is,” Ben says. “And I think it’s fascinating especially at times like this in June, when suddenly corporations are trying to attract every single member of the LGBT community with one specific campaign — paint something with a rainbow, sprinkle some glitter on it, and add some unicorns and it’s done. That’s it. They’re going to be happy with that.

“But you have to understand that there are so many different views. So many opinions. So many lives, so many privileges, and so many lacking in privilege. You do have multiple parts of your identity and the way that they intersect can hold you back, so this isn’t one homogeneous group of individuals. Yes, we share several experiences with each other, but you can be individual within that. I do know some LGB people who are not supportive of trans lives and this is why I think it’s so important to dig deeper into these into these topics and into these experiences, because the more that you paint the LGBT community as one community, the more vocal some of those people will be to speak out against whoever. That’s why we’re seeing some of these, these fractures.

“It’s also quite worrying the lengths people are going to be heard now… I think it is going to get a lot worse before it gets better.”

There are a lot of other marginalised voices out there, voices that aren’t represented and for many, many intersections in society. I ask Ben how he thinks we can make sure that the diversity of voices in our community can be included and respected?

“Well, when you find the answer to that, let me know!’ he laughs. Then he adds, “I do have a few ideas, though. For me, it’s about getting out to people. I have a WhatsApp group of people who when I do a story, or I’m thinking about a story, I ask them what they think and they can give me their perspectives, and that’s been really important to me. I think everyone can really benefit from just speaking to people more and just understanding their own lived experiences. I think the internet has enabled us to do that. If I want to find out the experiences of an asexual person, I can literally search the hashtags on Instagram, on Twitter, on Tik-Tok and I can find those lived experiences, and I can speak to that person.

I don’t think that with traditional media, maybe not covering certain voices in the same way or maybe advertisers not covering it in the same way, I don’t think that has like a direct reflection on what people actually think about their own identities now, because representation is out there, it’s happening, whether you like it or not people are literally standing up to be counted.”

Diverse people may be standing up to be counted on social media, but in the traditional media there are very narrow stories. As our conversation winds down, I ask Ben, in an ideal word, what role should the mainstream media play for LGBT people?

“When I joined the news, I very quickly realised that there was not really anyone that looked like me or sounded like me, or was doing what I wanted to do, and therefore I had to make my own path,” he says. “I would hope that in me getting this role, other people are realising that they can do this. I would hope that the media becomes more representative of the people that are out there reading and watching the content. I think we’ve seen some real change as a result of Black Lives Matter, so over the next few years I would really hope that representation does increase amongst more diverse communities.

To be able to see that on the inside would be fantastic. But I think from the outside, that’s where you really need to see it, because it isn’t an us versus them mentality. I report on the stories that people tell me, and if people stop telling me things, I have nothing to report. People will go through things and think ‘I need to tell Ben at the BBC about this’ before anything else, sometimes before telling the police. It’s such a humbling thing to know that I’ve built up that trust, but that’s what we need more of. We need people to trust those that are providing the news with their stories because these are huge platforms. This is your experience, this is what you’re going through, these are the stories that need to be told. And if you don’t feel you can go to the media with your story, do it yourself. Become a journalist. Amost everyone has the power to write. So, put your story out there and see what can be done.”

Ben Hunt’s first year on the job as BBC LGBT Correspondent* has been an unprecedented one, with the rise of anti-LGBT hatred in Europe, marked […]
read more
Podcast

Over the past few years, ILGA-Europe have been pleased to partner with an increasing number of companies, large and small, leading the way in support […]
read more
Blog

The best moments of the European Equality Gala Online

Because we couldn’t gather in Brussels this year for ILGA-Europe’s annual Gala celebration, we decided to hold a virtual event instead. The boost that right-wing forces have been given by the COVID-19 pandemic, along with the enormous impact of the crisis on individuals the LGBTI community, makes the work ILGA-Europe does for profound change through inclusive activism more important than ever. Here’s what happened at our first ever European Equality Gala Online…
read more
Subscribe to our newsletter
Subscribe
loading...