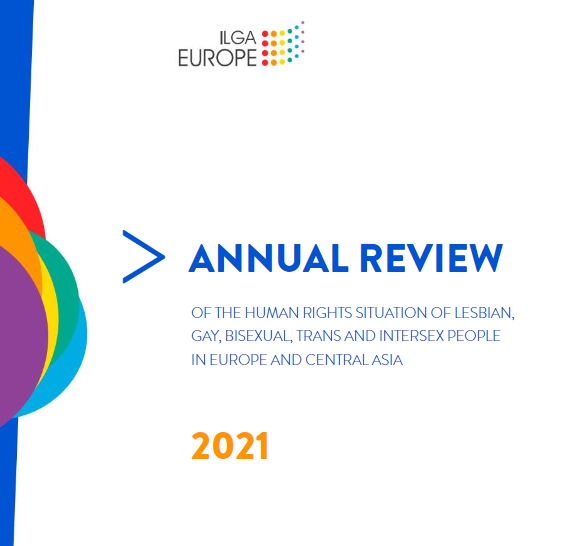 The ILGA-Europe Annual Review of the Human Rights Situation for LGBTI People in Europe and Central Asia contains a stark message that progress which has been taken for granted is not only increasingly fragile, but particularly vulnerable to exploitation by anti-human rights forces. Read on for our 10 key findings.

2020 has been an extraordinary year. Our tenth Annual Review of the Human Rights Situation of LGBTI People in Europe and Central Asia confirms that the COVID-19 pandemic has disproportionately impacted already vulnerable LGBTI communities.

Our Annual Review covers the events and developments for LGBTI rights and people over a twelve-month period in 54 countries from Andorra to Uzbekistan. It also covers a wide range of themes, including asylum, hate speech, freedom of expression, legal gender recognition, and many more. You can check it out at our website or navigate interactively across chapters in the Rainbow Europe module.

1. There has been stark rise in hate speech

In country after country, we see a disturbing rise in abuse and hate speech against LGBTI people, many who became vulnerable to homelessness have been forced to move back in to hostile family and community situations because of the COVID-19 pandemic.

2. LGBTI organisations have done the job of governments during the pandemic

In 2020, LGBTI organisations have had to skew their work towards provision of basic necessities like food and shelter as many governments left LGBTI people out of their relief packages.

There is a significant growth of opposition towards trans rights and this is beginning to have a wide and negative impact on legal gender recognition. There is legal regression and stagnation in 19 European and Central Asian countries, many of which have seen opposition forces become louder, saying that advancing the protection against discrimination and self-determination for trans people would harm women’s rights or ‘the protection of minors’.

4. LGBT people are being used as scapegoats

There has been a resurgence of authorities and officials using LGBT people as scapegoats, while authoritarian regimes are empowered to isolate and legislate without due process.

5. We are witnessing a crackdown on democracy and civil society

Overall there has been a crackdown on democracy and civil society, and not just in Poland and Hungary, which made all the headlines in 2020. We are seeing this in Turkey, Azerbaijan, and across Central Asia, while activists in several countries report fears of following in Poland and Hungary’s footsteps.

6. Attacks on freedom of assembly continue to be a growing trend

Due to the COVID-19 lockdowns, Prides have been cancelled all across Europe. The absence of Pride events matters not just as a test of free assembly, but because of the potential longer-term impact on the visibility and presence of LGBTI people and communities in the public space. In addition, attacks on freedom of assembly continue to be a growing trend with brutal crackdowns and legal challenges.

Although there is stagnation of same-sex partnership registration or marriage rights in several countries, Montenegro became the first Western Balkans country to introduce civil partnership; while in Serbia the government promised steps toward introducing civil partnership in 2021. However, the growing trend across the region is that more countries are moving on parenthood rights rather than partnership rights, and paying more attention to the protection of children’s rights, shifting the focus away from LGBTI rights.

8. The way we define progress is evolving

In the last five years there’s been legislative progress in a lot of countries, but in too many places we’re still waiting for those laws to translate into real change in the lived experience of LGBTI people. Also, more people are turning to the courts for the recognition of their human rights, or for the clarification of existing legislation that is meant to protect them.

While many people within the movement are talking about intersectionality, and taking steps to work on intersecting inequalities that affect LGBTI people, very few groups articulate their commitment to intersectionality in the public sphere. For example, while we know from our work that many LGBTI activists took part in the Black Lives Matter (BLM) demonstrations in 2020, few connect their support to the BLM movement to their own work, for example on police violence against LGBTI people.

10. Awareness is growing at an institutional level

Many courts and governmental institutions are beginning to have a larger awareness of growing negative trends. It was important in 2020 to see the European Commission resetting its commitment to protect and advance LGBTI rights with the EU LGBTIQ Strategy 2020–2025.

Reporting from country after country provides a glaring clarification that progress which has been taken for granted is not only increasingly fragile, but particularly vulnerable […]
read more
Report