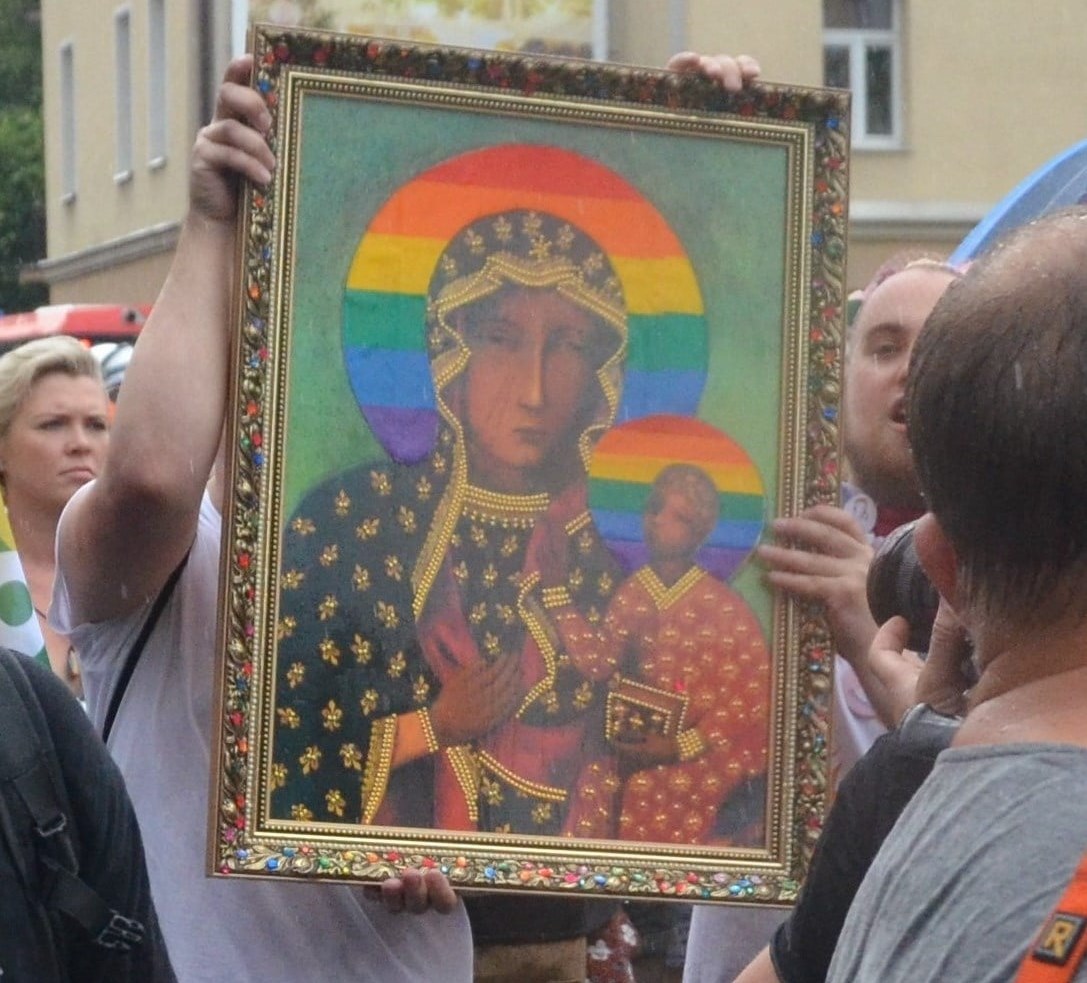 The trial of three women accused of “offending religious beliefs” will take place, tomorrow on January 13 in Plock, Poland. The activists face up to two years in prison for disseminating posters of the Virgin Mary with a rainbow halo symbolic of the LGBTI flag. Six international human rights NGOs are calling for all charges to be dropped, and for the Polish authorities to amend their legislation and bring it in line with international and regional human rights standards.

After a first postponement in November, the trial against El?bieta, Anna and Joanna (whose surnames are not being used to protect their privacy) will take place this Wednesday, January 13. Under article 196 of the Polish Criminal Code (C.C.), the women are accused of having ‘publicly insulted an object of religious worship in the form of this image which offended the religious feelings of others’ in relation to their display of posters of the Virgin Mary with a rainbow halo on 29 April 2019. If found guilty, the activists face up to two years in prison.

The authorities arrested and detained El?bieta in 2019 after she took a trip abroad with Amnesty International. The authorities opened an initial investigation against her in May 2019, and in July 2020 they officially charged the three activists.

Six non-governmental human rights organisations: ILGA-Europe, Amnesty International, Campaign Against Homophobia, Freemuse, Front Line Defenders, and Human Rights Watch call on the Polish Prosecutor General to drop the charges and ensure that the three women are allowed to carry out their human rights work without harassment and reprisals by the authorities.

RESTRICTING THE RIGHT TO FREEDOM OF EXPRESSION

Creating or distributing posters such as the ones depicting the Virgin Mary with a rainbow halo should not be a criminal offence and is protected under the right to freedom of expression.

In its current formulation, article 196 of the Polish C.C. imposes undue restrictions on the right to freedom of expression by providing overly broad discretion to the authorities to prosecute and criminalise individuals for expression that must be protected. This is incompatible with Poland’s international and regional human rights obligations.

Poland is bound by the International Covenant on Civil and Political Rights (ICCPR), the European Convention on Human Rights as well as the Charter of Fundamental Rights of the EU to respect, protect and fulfill the right to freedom of expression.

Furthermore, in 2013, the Special Rapporteur in the field of cultural rights noted that “Restrictions on artistic freedoms based on insulting religious feelings… are incompatible with [ICCPR]”. In 2019, this was again highlighted by the Special Rapporteur on freedom of opinion and expression, who stressed that criminalising expression that insults religious feeling limits “debate over religious ideas and… such laws [enable] governments to show preference for the ideas of one religion over those of other religions, beliefs or non-belief systems”.

Freemuse is particularly concerned about the policing of artistic and creative content by the authorities in Poland and regard this court case as an unlawful attack on freedom of artistic expression.

Amnesty International has previously called on the Polish authorities to repeal or amend legal provisions, such as article 196 of the Criminal Code, which criminalise statements protected by the right to freedom of expression. Many other national and international human rights organisations have criticised provisions of the Polish Criminal Code, including article 196, as problematic because they constitute restrictions on the right to freedom of expression not permissible under international human rights law.

According to international standards, restrictions on the right to freedom of expression must be provided by law and formulated with sufficient precision to enable an individual to regulate his or her conduct accordingly (Human Rights Committee, General Comment 34 on Freedom of Expression, para. 25). The current formulation of article 196 is not sufficiently precise, leaves space for arbitrary interpretation and allows authorities to arrest, detain, and prosecute people simply for expressing views that may be perceived by others as offensive.

The six organisations state that everyone has a right to express themselves safely and without fear of reprisals, and that the right to freedom of expression is protected, even if some people might find the expression to be deeply offensive (Human Rights Committee, General Comment 34 on Freedom of Expression, para. 11). In the words of the European Court of Human Rights the right to freedom of expression “is applicable not only to information or ideas that are favourably received or regarded as inoffensive or as a matter of indifference, but also to those that offend, shock or disturb the state or any sector of the population”.

According to ILGA-Europe’s Advoacy Director, Katrin Hugendubel: “The case against El?bieta, Anna and Joanna is an example of the repeated harassment activists and human rights defenders face simply for carrying out peaceful activism in Poland, which Polish and international human rights organisations have documented and denounced at length in the last number of years.

“El?bieta, Anna and Joanna stood against hate and discrimination and for years they have been fighting for a just and equal Poland. They deserve to be praised and not taken to court for their activism.”

To date, around 140,000 people have joined an international campaign urging the Prosecutor General to drop the unfounded charges against the three women human rights defenders. The campaign is available at https://www.amnesty.org/en/get-involved/take-action/poland-activist-elzbieta-podlesna/.

El?bieta is one of the 14 women human rights defenders who were beaten and targeted for standing up to hate in Poland during the Independence March in 2018. See their story at https://www.amnesty.org/en/latest/campaigns/2019/04/14-women-blog/.

At the time of her arrest in May 2019, El?bieta had just returned from a trip to Belgium and the Netherlands with Amnesty International, where she participated in several events and advocacy meetings with activists and supporters to raise awareness about the situations of peaceful protesters and the crackdown they are facing in Poland.

To see a timeline on anti-LGBTI hate in Poland, click here.* Article 196 of the Criminal Code makes anyone found guilty of intentionally offending religious feelings through public calumny of an object or place of worship liable to a fine, a restriction of liberty, or to imprisonment for a maximum of two years.

Poland has reached a dangerous boiling point in its state-driven discrimination against LGBTI people. The first episode of ILGA-Europe’s podcast, The Frontline, goes behind the scenes to talk about a way forward for LGBTI activism in the country. Here’s what it’s all about…
read more
Press Release

An Urgent call on the European Commission and the Council of europe to refrain from approving recovery funds to the governments of Poland and Hungary, […]
read more
Subscribe to our newsletter
Subscribe
loading...