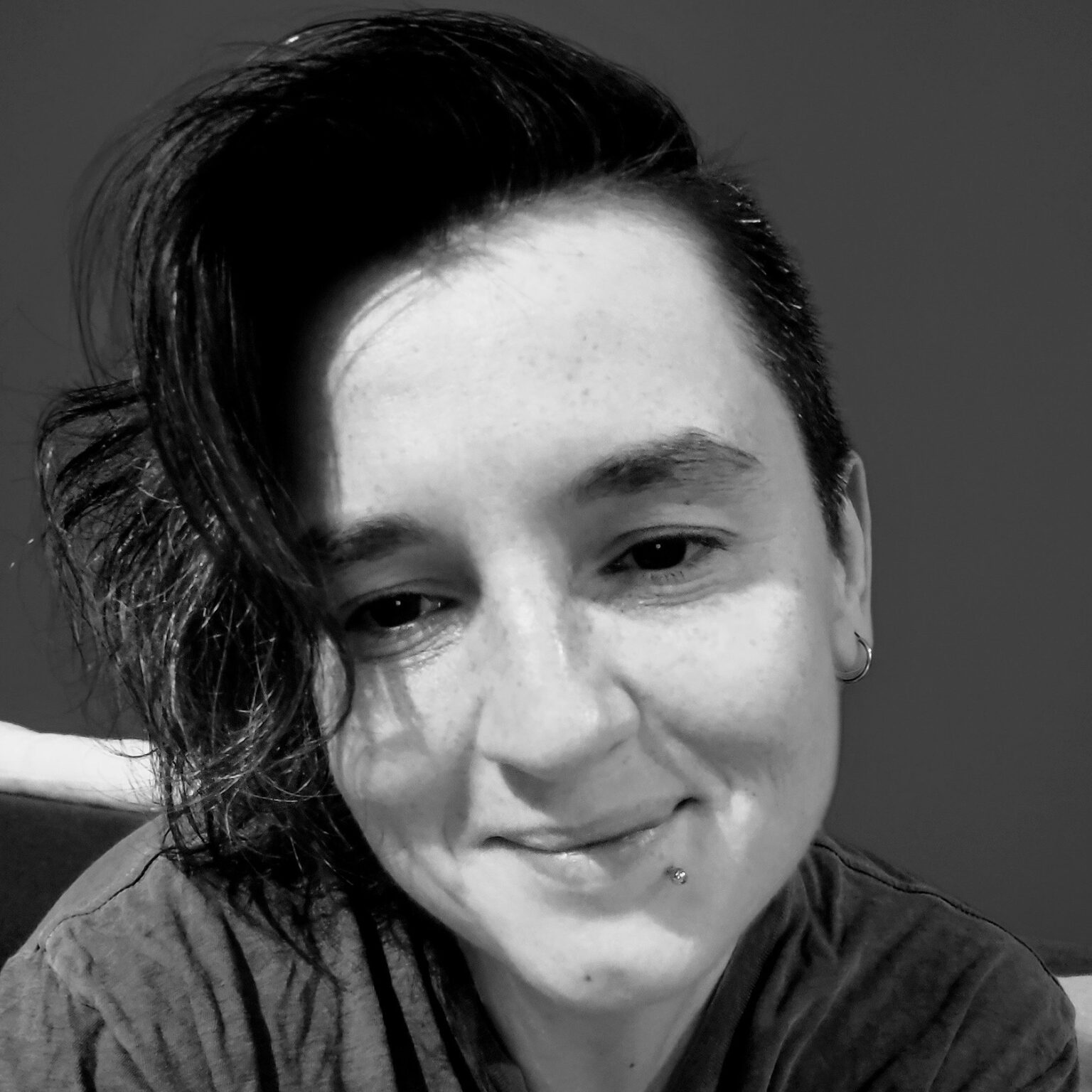 “When we are connected, our voices are louder and more heard.”

Their name is Asmira Topo, but everybody calls them Seka. “A long time ago, a friend thought that I was much younger than her when we first met, and that’s the name she started calling me,” Seka explains. “It means little sister in Balkan languages. It just stuck.”

It’s March but it already feels like summer in Zagreb, where Seka, originally from Bosnia, has lived for the past decade. Initially they came to the city to do their masters and be with their (now former) partner, but then they got involved in activism with the Croatian organisation, Trans Aid. Back in Bosnia, Seka hadn’t been activism oriented at all. “If somebody had asked me, I would have said ‘it’s not for me’,” they say. “But now that I’m actually doing it, it’s like, ‘this is really what I’m supposed to do’.”

Seka has taken a break from a gathering of their team outside their apartment to talk to ILGA-Europe. It is a small team and, as with all trans activists and communities in the region, hate is taking a toll on them all. ILGA-Europe’s Annual Review shows that online hate speech against LGBT people in Croatia was sharply on the rise in 2020. Overall, there is a substantial rise in anti-trans discourse across Europe and Central Asia, from official sources, in the media and online.

For Seka, the rise of trans exclusionary radical feminists (TERFs), who deny that trans women are women and reject them from their spaces, and do not not acknowledge non-binary people at all, is very worrying and exhausting. “It really upsets me when feminists are anti-trans, because I believe the trans movement is not separable from the feminist movement,” says Seka. “We were supposed to be working and improving society together, but instead they’re having all this anti-trans discourse. It’s just painful.”

Dealing with institutions when your identity is denied can be invasive. As part of the process of applying for citizenship in Croatia, Seka had to request some documents from Bosnia. “It was really awkward because they asked me very personal questions,” they say. Bosnian officials addressed them as “Mrs.” and “Miss” after Seka had asked them not to use either of those, the officials were rude and commented amongst each other, “For God’s sake, what is this?” referring to Seka as an object.

“I have all the documents from Bosnia for a month now,” says Seka, sitting by the balcony of their living room while the sounds of children playing outside is audible. “But I haven’t gone to the ministry here in Croatia yet because the personal questioning from Bosnia was too traumatic. I need to recover before going to another institution.”

Everyday life presents other complexities and discomfort. In their mother tongue, Seka uses both he and she pronouns. “If I’m in a store and I’m using both genders while talking on the phone, people will stare at me, trying to analyse what am I trying to say, wondering why I’m using ‘she’ and ‘he’ in the same sentence when talking about myself. They look at you, they try to analyse what’s going on. They don’t ask any questions or anything, but it’s still awkward.”

Unfortunately, the possibility of trans rights regressing is a realistic scenario under the current conservative government in Croatia. Many human rights organisations are solely focusing on not moving backwards.

“I honestly just hope that politicians are going to stop attacking us,” Seka says. “The legal gender recognition procedure was never perfect. It was always discriminatory and pathologising, but it was functioning and we had good communication with the medical experts involved. Now they’re not so open and we’re not having honest conversations anymore. I’m just hoping that the attacks are going to stop at some point and that we’re going to have some space to breathe and figure out what to do next.”

Before we finish our call, Seka shares their message for all trans communities in Europe and Central Asia, which in their diversity are facing similar struggles. “I hope to stay connected to each other and have each other’s backs. When we are connected, our voices are louder and more heard. We will not get lost in this chaos.”

This year, for the first time, Estonia and Switzerland reported the murders of trans people. In total, 2022 saw 327 reported murders of trans and gender-diverse people in the world as a result of anti-trans violence, according to TGEU’s Trans Murder Monitoring. Although TGEU has been collecting information since 2008, most trans murders still go under-reported.
read more
Report

Recent data shows that LGBTI young people perceive the labour market with fear and that most of LGBTI youth living with their families have experienced violence in different parts of Europe. These are among the alarming facts related to the impact of inequality and oppression in LGBTI communities, as identified through ILGA-Europe’s No One Left Behind initiative.
read more
Blog

Say Their Names: The trans and gender diverse people whose murders were reported in Europe and Central Asia last year

The murders of 375 trans and gender-diverse people were reported between October 2020 and September 2021, according to the latest Trans Murder Monitoring (TMM) update, and 2021 is set to be the deadliest year for trans communities since TGEU began collecting data. We say the names of those whose lives were cut short in our region, with a view towards a world where all trans people can live in equality, freedom and peace.
read more
Blog

Today, in a landmark judgement strongly welcomed by TGEU and ILGA-Europe, the European Court of Human Rights has ruled in favour of a woman in […]
read more
Podcast

In March 2021, Transgender Europe (TGEU) published the report, “Stuck on the swing: experiences of trans parents with freedom of movement in the EU”, in […]
read more
Blog

“Hope is my keyword for the year.”
read more
Blog

“There is so much strength found in solidarity, now more than ever.”
read more
Blog

“If we dismantle the gender binary, we will make life a lot easier for everybody.”
read more
Press Release

We, along with EL*C, TGEU, and OII Europe, are working to prepare a short submission to The Parliamentary Assembly of the Council of Europe on the specific needs and struggles of LBTI women in sports, and are looking for your inputs to this submission by 31 January.
read more
Blog

Every November 20, on Trans Day of Remembrance (TDoR), we remember those whose lives have been taken away through transphobic violence. This year’s Trans Murder Monitoring report from Transgender Europe shows the highest number of annual killings since the report was first published 12 years ago.
read more
Case Law

In the judgement Rana v. Hungary delivered today, the European Court of Human Rights (ECHR) held that Hungary had breached its obligation to protect the right to private life under Article 8 of the Convention by rejecting the application of an Iranian transgender refugee to have his name and sex marker changed officially.
read more
News

TGEU, ILGA-Europe, and IGLYO, the three largest networks of LGBTI and trans organisations working in Europe and Central Asia, are calling on the Parliament of Kazakhstan to remove the age limit from their proposed amendment No. 539 to the draft “Code on the health of the people and the healthcare system”.
read more
Press Release

A court in Kyrgyzstan has found in favour of a trans woman after a TV channel illegally filmed her and broadcast the footage, ordering compensation […]
read more
News

Today, after nearly a decade of efforts from trans and gender diverse activists and organisations, and their allies, the World Health Assembly approved the newest update to the […]
read more
News

In a new judgment today, the European Court of Human Rights decided in favour of a Macedonian trans man applicant and found the violation of […]
read more
News

The Czech Republic violates the human rights of transgender people as guaranteed by the European Social Charter, found a decision that was made public this […]
read more
News

Are you campaigning for legal gender recognition in your country? Discover how to talk about self-determination with policy-makers, media, allies and community members. ILGA-Europe will […]
read more
News

The Portuguese Parliament has adopted a law establishing the right to self-determination of trans persons aged 18+ in the legal recognition of their gender identity. […]
read more
News

Hours before International Day against Homophobia, Transphobia and Biphobia, the Swedish parliament declared their support for greater legal protection for trans people. There are two […]
read more
Press Release