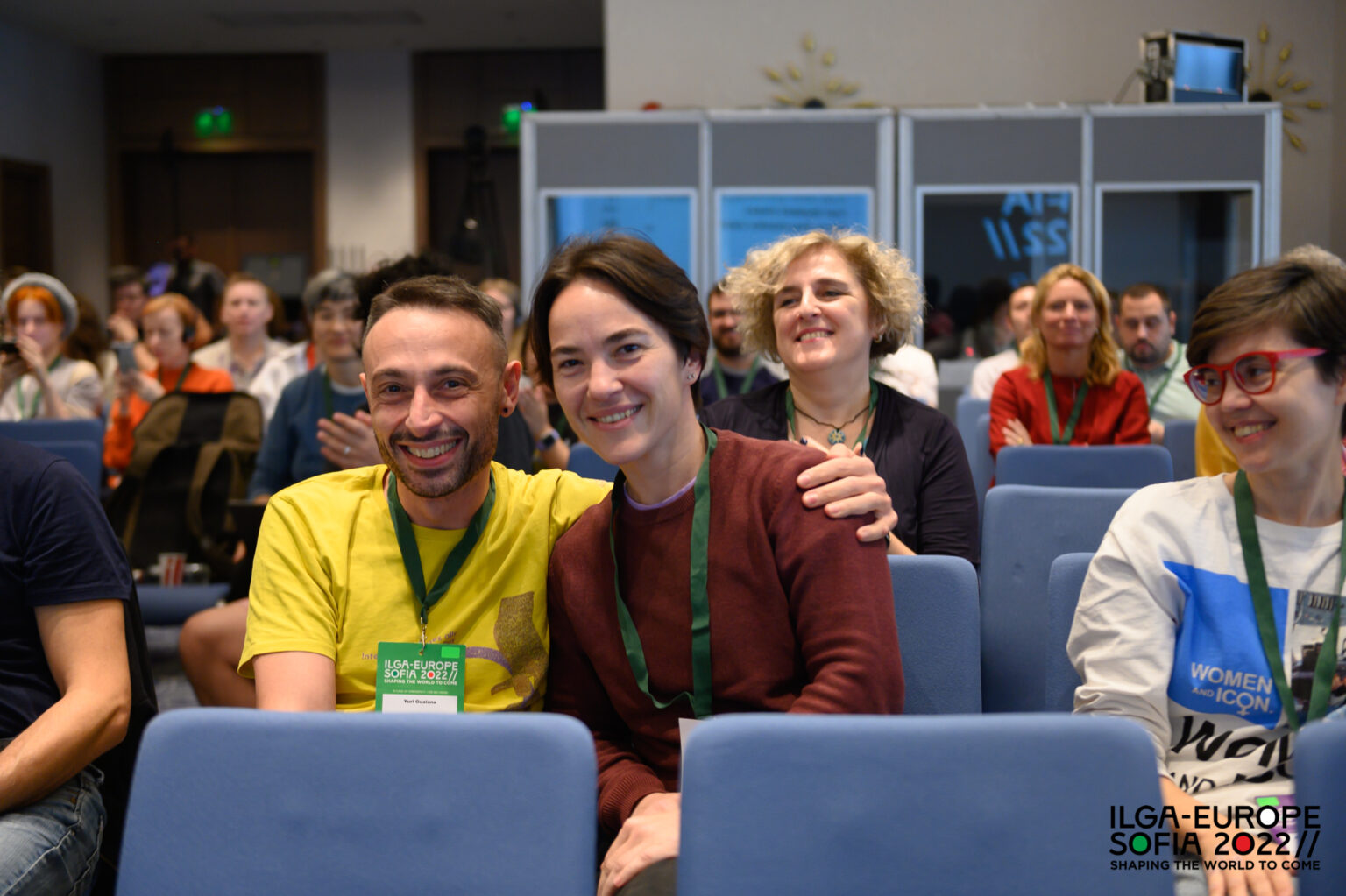 As our Annual Conference sadly comes to an end, over 300 participants enjoyed one last day of workshops and celebrated the election of the new ILGA-Europe board, before the Gala Dinner and one last dance together. Here’s a round-up of the final day!

This morning the breakfast room was calmer than usual. Many activists surely needed some extra sleep after putting their singing and dancing talents to work at our legendary karaoke night last night. The most popular band was Abba, with many of their hits chosen by super-enthusiastic singers, but the song many will remember is the Opus number, Life is Life – for reasons that will only be known to whoever was there!

Still, despite karaoke-induced tiredness, our spirited participants took part in the 13 workshops and applauded with joy at our third and last General Meeting.

The new ILGA-Europe board members, elected during the Conference, were announced: Yves Aerts, Ivan Dimov, Natia Gvianishvili, Xheni Karaj and Zhanar Sekerbayeva join Emina Bosnjak, Mamikon Hovsepyan, Tommy Petersen, Soudeh Rad and Penny Smith will sit on our Executive Board until October 2023. Yuri Guaiana and Olena Shevchenko will be regional representatives at the ILGA World Board for another year, while Rachael Moore, Dan Christian Ghattas, Elias Fjellander, Alina Mirozyan and Sabrina Sánchez will be leading some of the ILGA World steering committees. Finally, we had a chance to say goodbye in person to those leaving or have recently left the board: Yuri Yoursky, Anastasiia Danilova and Darienne Flemington – we will miss you so much!

Participating LGBTI activists learned about interacting with the media and managing change at their organisations at two four-hour long workshops this morning. At the ‘Drop the Mic’ workshop, participants rehearsed their media game in mock TV interviews with our facilitators and brought home key techniques to apply in their media relations.

In a parallel workshop, participants explored the potential bottlenecks and breaking points that their organisations may go through in face of disruptive events, like those we’ve experienced in recent times. Two-hours self-organised spaces gave the chance for trade union leaders to get together and to discuss how to shape the future by taking care of the past.

We sang the Abba hit last night and today activists had the chance to gain some wisdom on funding and partnering with the private sector.

‘Who’s Afraid of Pinkwashing?’ asked COC Netherlands at one of the late morning workshops. In places like the Netherlands, some companies are pulling out of Prides due to criticism of pinkwashing. Companies taking less space at Prides is a good thing, but what are alternative ways of working with the private sector to keep companies engaged and supportive of the LGBTI movement? This workshop navigated these questions through an interactive role-playing exercise where participants wore the hats of company CEOs, LGBTI staff representatives, PR advisors and critical members of the public.

After lunch, the practical hands-on ‘Effective Fundraising Campaigns in Times of Crisis’workshopprovided practical tips for creating fundraising campaigns targeted at individual donors, with activists from Poland and Armenia sharing examples of how they’ve raised funds following hostile developments and in response to crisis.

In the afternoon too, participants had the opportunity to join workshops on anti-NGO laws, building alliances for displaced LGBTIQ Ukrainians and next steps on Ukraine response, queer imaginings and moral panics on trans minors.

We will all soon go back to the places we call home. Gathering together in person after three years would not have been possible without the wonderful support of our local hosts. Big shout outs to GLAS Foundation, Bilitis and Deystvie for enabling these unforgettable days of rich, nurturing and game-changing conversations! See you all in 12 months in Slovenia, if not beforehand!

As ILGA-Europe gears up in the organisation of our Annual Conference, which takes place in Sofia this October, the theme ‘Shaping the World to Come’ […]
read more
News

When an EU country recognises a child and its same-sex parents as a family, all EU countries should recognise them as such, so to guarantee their freedom of movement. This is what the EU’s top court ruled in December. But how this case has advanced LGBTI rights in the European Union and what comes next for rainbow families?
read more
Press Release

In a landmark judgement, the Court of Justice of the European Union has ruled that a child and its same-sex parents must be recognised as […]
read more
Blog

Evelyne Paradis, Executive Director of ILGA-Europe reflects on the annual Gathering, the online version of Europe and Central Asia’s LGBTI conference, and what it affirmed for the movement at this time of momentous change.
read more
Blog

We meet Kalina and Jane, from Bulgaria and the UK respectively. Because their daughter Sara was born in Gibraltar, she cannot claim UK citizenship via […]
read more
Press Release

A baby born to two mothers, one from Gibraltar and one from Bulgaria, has become a test case at the European Court of Justice for the freedom of movement of rainbow families in the EU. Read on and find out how to join our campaign for parents without borders!
read more
Blog

The virtual replacement for ILGA-Europe’s annual conference, The Gathering Online 2020, was the largest coming together of LGBTI activists from across Europe and Central Asia since Covid-19 began, and a new collective agenda became fully apparent. ILGA-Europe’s Executive Director, Evelyne Paradis, reflects on a ground-breaking experience.
read more
Podcast

“Attitudes towards LGBTI people are changing and changing fast,” says activist, Lilly Dragoeva from the Sofia-based Billitis Foundation, in this episode of The Frontline, which […]
read more
News

From the high-powered offices of government, to the vanguard of the Czech Republic’s LGBTI movement, Czeslaw Walek tells his story of activism in action.
read more
Blog

At one of the largest ever ILGA-Europe Annual Conferences, hundreds of equality and diversity organisations have come together to issue a strong call for change […]
read more
Policy Paper

Be Yourself – new video by Single Step

One of our member organisations in Bulgaria, Single Step, have launched a new motivational video.  The video was created to inspire young people around the […]
read more
Report