5 urgent things the EU must do to help to protect Afghan women, girls and minorities at risk 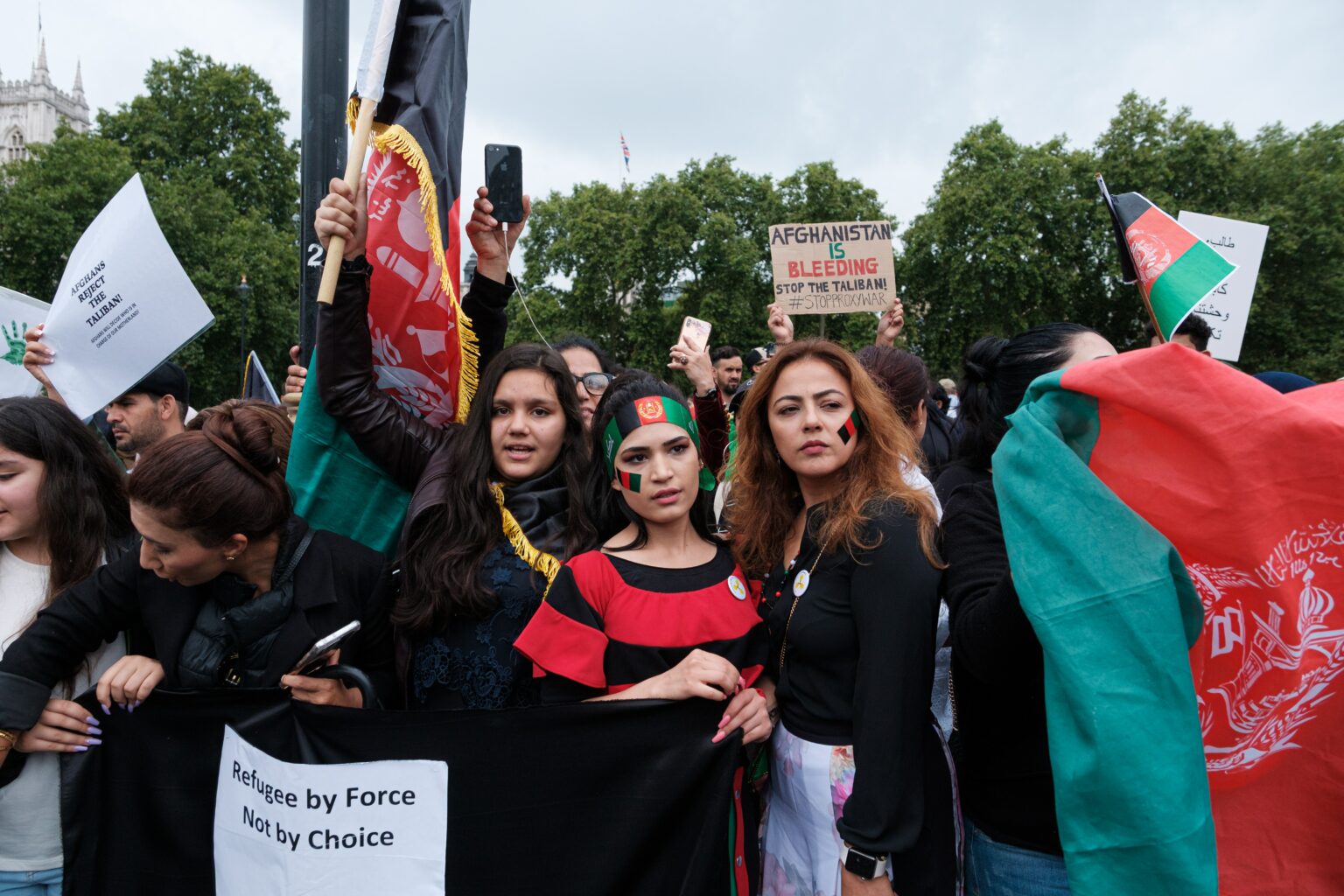 Since the Taliban have come back to power in Afghanistan, leading to a humanitarian crisis as thousands try to flee the country, ILGA-Europe and several European human rights organisations are alarmed and deeply worried about the security of people, especially women and minorities, including LGBTI people. Here are five responses the EU and its member states must engage in to protect Afghans at risk.

After 20 years out of power, the Taliban, whose interpretation of Sharia law poses a major threat to women and minorities, rule Afghanistan once more. Back in 2001, in response to the 9/11 attacks, the US intervened in the Talbian’s brutal rule. The organisation had offered its protection to Osama Bin Laden, who was responsible for the 9/11 attacks in New York and Washington. While a new Afghan government took over in 2004, the Taliban attacks never went away. Fast forward to the summer of 2021, and as American troops got ready to leave Afghanistan, in line with an agreement made by former President Donald Trump, the Taliban took over the main cities, and finally the capital, Kabul, installing themselves back in power. President Joe Biden has confirmed that US troops will exit the country by August 31. Women and minorities, including LGBTI people, are at high risk under the Taliban’s extremist regime. Many are fleeing in desperation.

It is crucial that the small proportion of displaced people who do arrive in Europe are given rapid access to a fair asylum procedure in line with European states’ obligations under EU and international law.

Here are five urgent responses the EU and its member states must engage in to protect Afghans at risk:

1. Evacuate as many of the people facing immediate security risks as possible, as quickly as possible

This is the immediate priority, which should then be followed by expansion of resettlement and complementary pathways for those most at risk and most vulnerable. A particular focus should be on women and girls and their immediate family members. Attention should also be paid to the situation of minorities, including LGBTI people, where they are at additional and immediate risk of persecution.

Europe should continue the critical efforts to establish and implement safe and regular routes to protection, including for those who have worked for European institutions and agencies (military, diplomatic and civil society) in Afghanistan, and those at immediate risk after the Taliban takeover. Information on how to apply should be clear and procedures should be as simple as possible, taking into account that people are on the move, may have limited internet access and are using mobile phones to apply, and that they may have struggled to obtain or lost their original documents on the journey.

Family reunification is a crucial safe route to protection, and has untapped potential to be used in emergency situations. Implementing existing commitments and legal obligations on family reunion is a priority, including allowing safe routes and the necessary documentation for those seeking to apply and for those who have already been accepted. In addition, temporary programmes with a widened scope of family definitions to include more family members and an easing of evidential requirements (such as provision of documents that may be impossible to acquire) should all be considered. Similarly, complementary pathways, such as private sponsorship, student scholarships and humanitarian visa programmes should be rapidly expanded, especially given the willingness of communities, institutions and organisations to support Afghans.

2. Scale up provision of humanitarian assistance

It is necessary to rapidly scale up coordinated humanitarian assistance to Afghanistan itself, via independent organisations still able to operate, and to the neighbouring countries. Preserving access for humanitarian actors should be incorporated into international negotiations and international responses. In particular, critical services for women and girls must continue to be delivered, and this requires female aid workers who are able to access communities and create safe spaces for women and girls.

It should be noted, however, that humanitarian assistance in the region is not a substitute for Europe offering protection in line with EU and international obligations. Nor is it a means to deter those who are vulnerable and at risk from pursuing a safe route to protection.

3. Re-establish security for the people of Afghanistan

Use the EU’s Common Foreign and Security Policy (CFSP) and other EU external action, including diplomatic efforts, civilian crisis management, sanctions and other operational tools, to support security for Afghans and international peace negotiations.

The EU should support engagement of all relevant international actors, including those supporting proxies in Afghanistan and with interests there, in efforts to stabilise the situation. Dialogue with all relevant actors in Afghanistan when it is in the interests of the people of Afghanistan is important. However, apart from humanitarian assistance, all other forms of cooperation with any potential future government should be conditional on respect for the fundamental rights of all Afghans, in line with the international obligations of Afghanistan and of the EU. It also has to be ensured that potential sanctions do not negatively affect the ability to provide humanitarian aid.

The objective of EU foreign and security support and operations should be the security of Afghans and protection of civilians in the short-term and peace in the long-term for the people of Afghanistan. This should be prioritised over counter-terrorism, anti-migration or otherwise narrowly defined European interests.

When the immediate crisis has abated, a thorough evaluation of the EU’s role in the international efforts in Afghanistan must also take place, in order to inform future Common Security and Defence Policy (CSDP) and wider CFSP actions. The current situation is a test for the European External Action Service and it should lead Europe’s response.

European countries must provide rapid access to fair asylum procedures for the small proportion of displaced Afghans who seek protection here. The practice of pushbacks and collective expulsions of Afghans (and other nationalities) at European borders must stop. Resources and attention should focus on preparations, such as ensuring that asylum systems are functioning including with adequate reception space — as they should be in any case.

Examination of cases already in asylum systems must take into account the reality on the ground and re-examination of decided asylum cases should take place, given the dramatic changes in the situation in country. We strongly support the initiatives already taken by some Member States in this regard but express dismay that some countries have frozen decision-making in open cases.

It is particularly worrying and dangerous the insular approach of certain European politicians who seek to make the situation about “us”, Europe, and the small impact that will be had here, rather than keeping the focus on the security and humanitarian needs of Afghans.

It was not safe to deport people to Afghanistan before the Taliban takeover; now it is certainly not the case and courts will — rightly — halt deportations. Asylum and other cases where human rights concerns preclude deportation need to be reviewed in light of current developments. It can be assumed that the majority will meet the criteria for international protection. Alternatives to deportation and related detention need to be considered, including providing legal statuses and the right to remain; decision-making should not be put on hold.

Joint Statement: Current priorities for an EU response to the situation in Afghanistan

As European NGOs working on asylum and migration and Afghan Diaspora organisations in Europe, we are alarmed about the situation in Afghanistan and concerned above all about the security of the people of Afghanistan, both those within the country and those displaced and seeking protection in the region and beyond.
read more
Blog

Recent data shows that LGBTI young people perceive the labour market with fear and that most of LGBTI youth living with their families have experienced violence in different parts of Europe. These are among the alarming facts related to the impact of inequality and oppression in LGBTI communities, as identified through ILGA-Europe’s No One Left Behind initiative.
read more
Report

The Fleeing Homophobia research, a study on policy and practice in 25 European countries, showed huge diversity in the handling of LGBTI asylum claims in […]
read more
Press Release

In the judgement Rana v. Hungary delivered today, the European Court of Human Rights (ECHR) held that Hungary had breached its obligation to protect the right to private life under Article 8 of the Convention by rejecting the application of an Iranian transgender refugee to have his name and sex marker changed officially.
read more
Blog

The COVID-19 pandemic and the political responses to it have hit already beleaguered LGBTI asylum seekers in Europe particularly hard. We report on the alarming impact.
read more
News

in an important development from the Court of Justice of the European Union, psychological testing has been prohibited as an assessment method for . These […]
read more
Subscribe to our newsletter
Subscribe
loading...