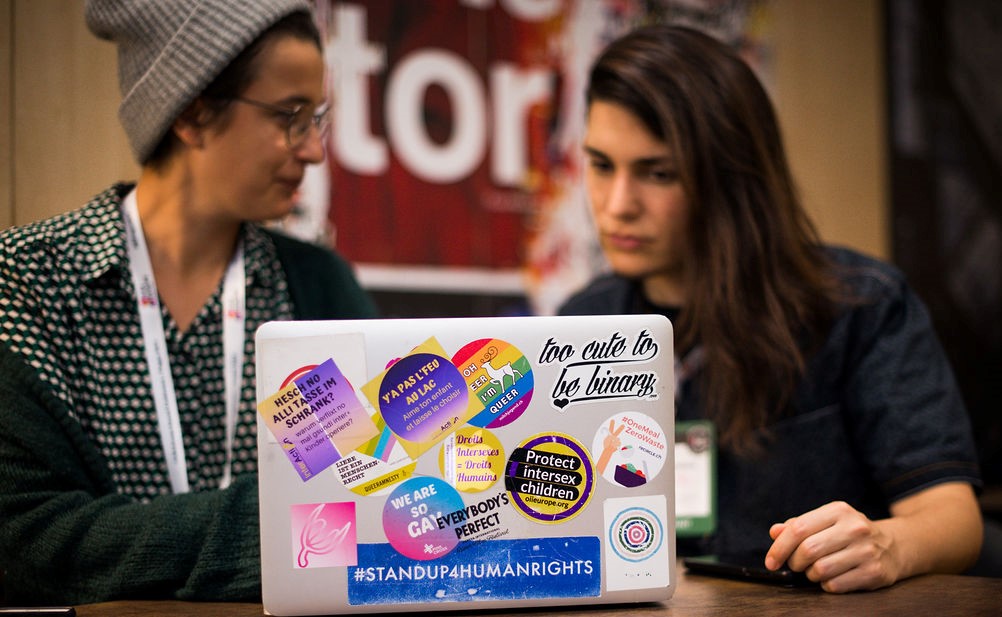 Over the past few years in Europe and some other parts of the world, we have seen the rise of the ‘anti-gender’ movement, with opposition to LGBTI rights centralised around so-called “gender ideology”.

“Gender ideology” has become an all-inclusive mobilising tool, used by various groups in the anti-gender movement (many of them religious), political parties and even state establishments to prevent equality policies from being adopted and implemented.

Our societies are built on stories. They shape how we understand our relationships, what relationships we value and pursue, and how we classify ‘us’ and ‘them’. That we can deny rights to people based on their country of origin, sexuality, or gender identity, is only possible due to a set of beliefs, or stories, about one group being more deserving than another.

At ILGA-Europe we are working on various fronts to better understand the anti-gender forces and their impact on public discourse and the lives and rights of LGBTI communities. By understanding ‘framing’ — how these stories interact with our thinking -campaigners and activists can craft their communications to effectively challenge the anti-gender rhetoric and create sustainable social change.

“Your silence will not protect you,” the feminist author and activist, Audre Lorde famously wrote. As activists we learn that speaking out goes beyond simply being the loudest voice in the room. How can we deliver our messages to those who do not fully support in our cause, but may be brought around? Based on our ongoing research, here are five recommendations to challenge anti-gender discourse.

Even people who we don’t agree with share many of our motivations and want to do the best they can. Respecting the journey people may have to go on and acknowledging their discomfort are key to reducing prejudice.

Common grounds can be more easily understood when visibility is enhanced in areas such as workplace and the neighborhood, for example by showing shared objectives and struggles. The values and challenges LGBTI people and the rest of society have in common should be highlighted. Message testing however showed that when the rights discourse is translated into specific examples that people can easily relate to, the attitudes of respondents are more positive.

Raising awareness of discrimination against LGBTI communities won’t work if people don’t see how they can contribute to the solution. Our research showed that respondents often don’t understand how they can play a positive role in making change happen. Presenting the existing problem with ideas of how people can play a positive role in solving it, will help you to turn it around!

To the wider majority, LGBTI people are largely invisible; that’s why requests for rights are often not understood or taken on board. As discrimination is not seen in their everyday lives, it is a good idea to show them that LGBTI people exist and give illustrations of our actual experiences. Concrete examples such as personal stories are very helpful, especially if associated with issues (like access to employment) that non-LGBTI people can relate to.

In some countries LGBTI activists quoted derogatory terms used by the anti-gender movement to refer to LGBTI people in their messages. However, this strategy triggered negative reactions in our research and was considered inappropriate and too challenging. To bring people on board with your message, use non-inflammatory language that everyone can get on board with.

LGBTI Activism 101: Connecting with the Media

It’s important that the media explores the issues that affect our communities in a realistic way, but for many LGBTI activists, getting journalists interested can seem difficult, if not impossible. Our latest activism Skills Boost sessions explored connecting to the media. Here’s what our participants learned.
read more
News

Introduction Earlier this year, ILGA-Europe launched a programme to foster stronger and more strategic communications across the European and Central Asian LGBTI movement and to […]
read more
News

The next of our popular Skills Boost sessions for LGBTI activists will take place on September 14 (12:00-13:30 CET), giving you practical advice on how […]
read more
News

Do you want to make better use of graphic design in your LGBTI activism?
read more
Blog

The author of 18 books of fiction and non-fiction, including The Bastard of Istanbul,Honour, and Three Daughters of Eve, Elif has come under fire from the Turkish authorities […]
read more
News

We have launched a re-granting programme to strengthen the capacities of LGBTI organisations in Europe to achieve change in the current landscape of rising anti-LGBTI forces.
read more
Report

You are invited to register for the activist launch of ‘Communicating for Change: a communications needs assessment of the LGBTI movement in Europe and Central […]
read more
Blog

Reporting from country after country provides a glaring clarification that progress which has been taken for granted is not only increasingly fragile, but particularly vulnerable […]
read more
News

Watch this series of short campaign videos created by LGBTI activists who got expert help to make easy, free homemade videos under lockdown conditions - and get some tips and inspiration for making your own!
read more
Podcast

“Attitudes towards LGBTI people are changing and changing fast,” says activist, Lilly Dragoeva from the Sofia-based Billitis Foundation, in this episode of The Frontline, which […]
read more
Blog

After our blog on crisis communication, ILGA-Europe hosted a Q&A call for LGBTI groups to share experiences and advice on communicating clearly during the COVID-19 crisis. Here is a summary and 60-second video of five lessons we
read more
Blog

COVID-19: How to communicate clearly as an LGBTI group

The COVID-19 crisis situation is changing every day, and as an LGBTI organisation you are going to want to keep your audience updated about what specifically matters to them. ILGA-Europe’s strategic communications consultant, Sho Konno, gives his key advice for communicating at this time.
read more
Report

Responding to the anti-gender movement

We will host a webinar on the results of the needs assessment that will inform ILGA-Europe’s capacity building work and donor funding strategies in the coming years. […]
read more
Press Release

Are you campaigning for legal gender recognition in your country? Discover how to talk about self-determination with policy-makers, media, allies and community members. ILGA-Europe will […]
read more
Report

This is a resource to help you test your messages. It is designed for campaigners who have little or no experience with message testing.  When […]
read more
Report

This toolkit is a short guide to strategic communications, based on extensive research and building on the experience of activists and communicators from around the […]
read more
Subscribe to our newsletter
Subscribe
loading...